What is Paracord and what are the different types?

Original Paracord is a ''U.S. made'' nylon cord that consists of a core of threads in a woven nylon jacket. The word 'Paracord' comes from its use by American paratroopers during the Second World War. After a parachute landing the cord would be cut from the parachute and used for all kinds of applications. Because of its popularity today the cord is available in many variants of varying quality. The Paracord Type III 550 is the most used Paracord and can be found in certain craft stores.

Paracord.eu is the largest supplier of original U.S. Made Nylon Paracord.

Paracord is available in all kinds of thicknesses, colours and patterns. The different thicknesses are often referred to as "Type" or with the corresponding breaking load (in pounds). For example, the most commonly used "Paracord Type III" is also called "550 Paracord" because it has a breaking load of 550 lbs. (249 kg). In addition to Type III, Type II is also widely used for more elegant knotwork and 'Type I' and 'Micro' are often used as an accessory cord. The term "Milspec Paracord" is used for Paracord that is made to strict U.S. Military specifications and is very suitable for knotwork in outdoor sports. 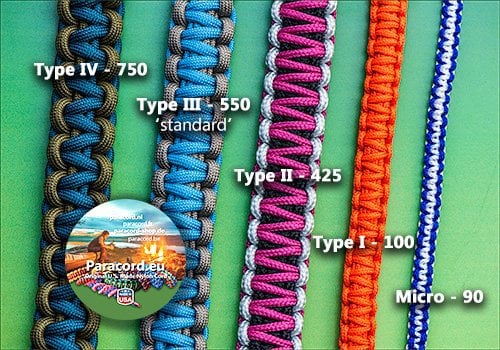 Due to the popularity of the paracord, there are now many variants available. The majority of paracord users prefer nylon. The main reason for this is that nylon feels more natural compared to the more plastic polyester. Nylon paracord is also more elastic, and this is experienced as pleasant by knotters.

What is original U.S Made Nylon Paracord?

The paracord that you buy from us is made by the American producer of paracord (GSA Compliant). They have been producing "cord" for 200 years and also supply the same paracord to the US Army. A number of colours have been created especially for us (e.g. DutchPride). They declare:

'Don't be fooled by other manufacturer's 550 cord. Many times it is made with inferior yarns, and will not meet the 550 pound tensile test. 550 cord is the 'real deal'; whether you are purchasing the Governments Mil-C-5040 Type III specification, or our own designed commercial version of #550 Paracord, you will not be dissatisfied with this product. We guarantee it'.

A number of paracord items have been added to our inventory at the request of our customers and these do not originate from America, but are produced in Europe. (Some bright neon colours). If a Paracord product does not come from America or is not 100% Nylon, we always indicate this explicitly!

The word paracord comes from the use by American paratroopers during the Second World War. After a parachute landing, the rope of the parachute was cut off and used for all kinds of applications. Like other army materials, paracord has subsequently become highly appreciated in general use. Initially, it was mainly veterans who tied bracelets for each other. Later, it was also used by outdoor athletes, hobbyists and an ever-growing group of paracord knitters. These bracelets have now become a huge hype in America. In Europe and the Netherlands they are also become a more and more common sight.